WHEN A NATION DOESN’T FEAR GOD 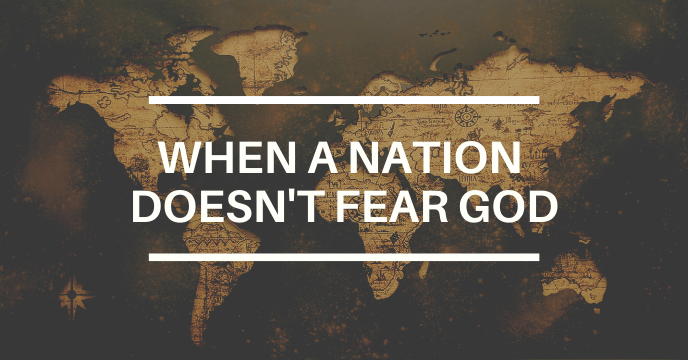 5 The Lord is exalted, for he dwells on high;
he will fill Zion with justice and righteousness,
6 and he will be the stability of your times,
abundance of salvation, wisdom, and knowledge;
the fear of the Lord is Zion’s treasure.

22 Do you not fear me? declares the Lord.
Do you not tremble before me?
I placed the sand as the boundary for the sea,
a perpetual barrier that it cannot pass;
though the waves toss, they cannot prevail;
though they roar, they cannot pass over it.
23 But this people has a stubborn and rebellious heart;
they have turned aside and gone away.
24 They do not say in their hearts,
‘Let us fear the Lord our God,
who gives the rain in its season,
the autumn rain and the spring rain,
and keeps for us
the weeks appointed for the harvest.’

18 For the wrath of God is revealed from heaven against all ungodliness and unrighteousness of men, who by their unrighteousness suppress the truth. 19 For what can be known about God is plain to them, because God has shown it to them. 20 For his invisible attributes, namely, his eternal power and divine nature, have been clearly perceived, ever since the creation of the world, in the things that have been made. So they are without excuse. 21 For although they knew God, they did not honor him as God or give thanks to him, but they became futile in their thinking, and their foolish hearts were darkened. 22 Claiming to be wise, they became fools, 23 and exchanged the glory of the immortal God for images resembling mortal man and birds and animals and creeping things.

24 Therefore God gave them up in the lusts of their hearts to impurity, to the dishonoring of their bodies among themselves, 25 because they exchanged the truth about God for a lie and worshiped and served the creature rather than the Creator, who is blessed forever! Amen.

26 For this reason God gave them up to dishonorable passions. For their women exchanged natural relations for those that are contrary to nature; 27 and the men likewise gave up natural relations with women and were consumed with passion for one another, men committing shameless acts with men and receiving in themselves the due penalty for their error.

28 And since they did not see fit to acknowledge God, God gave them up to a debased mind to do what ought not to be done. 29 They were filled with all manner of unrighteousness, evil, covetousness, malice. They are full of envy, murder, strife, deceit, maliciousness. They are gossips, 30 slanderers, haters of God, insolent, haughty, boastful, inventors of evil, disobedient to parents, 31 foolish, faithless, heartless, ruthless. 32 Though they know God’s righteous decree that those who practice such things deserve to die, they not only do them but give approval to those who practice them.

10 The fear of the Lord is the beginning of wisdom,
and the knowledge of the Holy One is insight.

19 Jehoshaphat the king of Judah returned in safety to his house in Jerusalem. 2 But Jehu the son of Hanani the seer went out to meet him and said to King Jehoshaphat, “Should you help the wicked and love those who hate the Lord? Because of this, wrath has gone out against you from the Lord. 3 Nevertheless, some good is found in you, for you destroyed the Asheroth out of the land, and have set your heart to seek God.”

4 Jehoshaphat lived at Jerusalem. And he went out again among the people, from Beersheba to the hill country of Ephraim, and brought them back to the Lord, the God of their fathers.5 He appointed judges in the land in all the fortified cities of Judah, city by city, 6 and said to the judges, “Consider what you do, for you judge not for man but for the Lord. He is with you in giving judgment. 7 Now then, let the fear of the Lord be upon you. Be careful what you do, for there is no injustice with the Lord our God, or partiality or taking bribes.”

8 Moreover, in Jerusalem Jehoshaphat appointed certain Levites and priests and heads of families of Israel, to give judgment for the Lord and to decide disputed cases. They had their seat at Jerusalem. 9 And he charged them: “Thus you shall do in the fear of the Lord, in faithfulness, and with your whole heart: 10 whenever a case comes to you from your brothers who live in their cities, concerning bloodshed, law or commandment, statutes or rules, then you shall warn them, that they may not incur guilt before the Lord and wrath may not come upon you and your brothers. Thus you shall do, and you will not incur guilt. 11 And behold, Amariah the chief priest is over you in all matters of the Lord; and Zebadiah the son of Ishmael, the governor of the house of Judah, in all the king’s matters, and the Levites will serve you as officers. Deal courageously, and may the Lord be with the upright!”

20 From there Abraham journeyed toward the territory of the Negeb and lived between Kadesh and Shur; and he sojourned in Gerar. 2 And Abraham said of Sarah his wife, “She is my sister.” And Abimelech king of Gerar sent and took Sarah. 3 But God came to Abimelech in a dream by night and said to him, “Behold, you are a dead man because of the woman whom you have taken, for she is a man’s wife.” 4 Now Abimelech had not approached her. So he said, “Lord, will you kill an innocent people? 5 Did he not himself say to me, ‘She is my sister’? And she herself said, ‘He is my brother.’ In the integrity of my heart and the innocence of my hands I have done this.” 6 Then God said to him in the dream, “Yes, I know that you have done this in the integrity of your heart, and it was I who kept you from sinning against me. Therefore I did not let you touch her. 7 Now then, return the man’s wife, for he is a prophet, so that he will pray for you, and you shall live. But if you do not return her, know that you shall surely die, you and all who are yours.”

8 So Abimelech rose early in the morning and called all his servants and told them all these things. And the men were very much afraid. 9 Then Abimelech called Abraham and said to him, “What have you done to us? And how have I sinned against you, that you have brought on me and my kingdom a great sin? You have done to me things that ought not to be done.” 10 And Abimelech said to Abraham, “What did you see, that you did this thing?” 11 Abraham said, “I did it because I thought, ‘There is no fear of God at all in this place, and they will kill me because of my wife.’ 12 Besides, she is indeed my sister, the daughter of my father though not the daughter of my mother, and she became my wife. 13 And when God caused me to wander from my father’s house, I said to her, ‘This is the kindness you must do me: at every place to which we come, say of me, “He is my brother.”’”

14 Then Abimelech took sheep and oxen, and male servants and female servants, and gave them to Abraham, and returned Sarah his wife to him. 15 And Abimelech said, “Behold, my land is before you; dwell where it pleases you.” 16 To Sarah he said, “Behold, I have given your brother a thousand pieces of silver. It is a sign of your innocence in the eyes of all who are with you, and before everyone you are vindicated.” 17 Then Abraham prayed to God, and God healed Abimelech, and also healed his wife and female slaves so that they bore children.18 For the Lord had closed all the wombs of the house of Abimelech because of Sarah, Abraham’s wife.

7 But seek the welfare of the city where I have sent you into exile, and pray to the Lord on its behalf, for in its welfare you will find your welfare.

WHAT THE WORLD NEEDS RIGHT NOW