TOMORROW IS NOT PROMISED 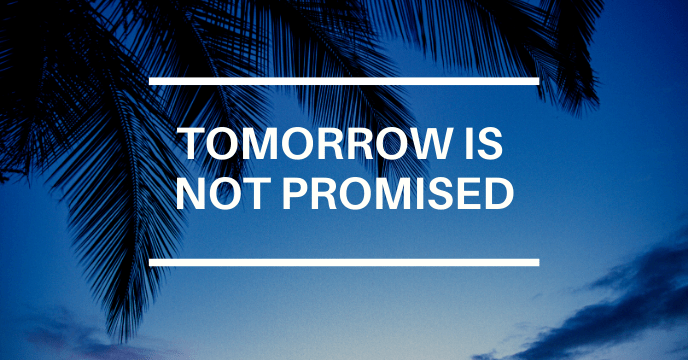 13 Come now, you who say, “Today or tomorrow we will go into such and such a town and spend a year there and trade and make a profit”— 14 yet you do not know what tomorrow will bring. What is your life? For you are a mist that appears for a little time and then vanishes. 15 Instead you ought to say, “If the Lord wills, we will live and do this or that.” 16 As it is, you boast in your arrogance. All such boasting is evil. 17 So whoever knows the right thing to do and fails to do it, for him it is sin.

The Fool Says, There Is No God

To the choirmaster. Of David.

14 The fool says in his heart, “There is no God.”
They are corrupt, they do abominable deeds;
there is none who does good.

19 But I will come to you soon, if the Lord wills, and I will find out not the talk of these arrogant people but their power.

7 For I do not want to see you now just in passing. I hope to spend some time with you, if the Lord permits.

The Parable of the Rich Fool

13 Someone in the crowd said to him, “Teacher, tell my brother to divide the inheritance with me.” 14 But he said to him, “Man, who made me a judge or arbitrator over you?” 15 And he said to them, “Take care, and be on your guard against all covetousness, for one’s life does not consist in the abundance of his possessions.” 16 And he told them a parable, saying, “The land of a rich man produced plentifully, 17 and he thought to himself, ‘What shall I do, for I have nowhere to store my crops?’ 18 And he said, ‘I will do this: I will tear down my barns and build larger ones, and there I will store all my grain and my goods.19 And I will say to my soul, “Soul, you have ample goods laid up for many years; relax, eat, drink, be merry.”’ 20 But God said to him, ‘Fool! This night your soul is required of you, and the things you have prepared, whose will they be?’ 21 So is the one who lays up treasure for himself and is not rich toward God.”

5 My soul will be satisfied as with fat and rich food,
and my mouth will praise you with joyful lips…

7 Be patient, therefore, brothers, until the coming of the Lord. See how the farmer waits for the precious fruit of the earth, being patient about it, until it receives the early and the late rains. 8 You also, be patient. Establish your hearts, for the coming of the Lord is at hand. 9 Do not grumble against one another, brothers, so that you may not be judged; behold, the Judge is standing at the door. 10 As an example of suffering and patience, brothers, take the prophets who spoke in the name of the Lord. 11 Behold, we consider those blessed who remained steadfast. You have heard of the steadfastness of Job, and you have seen the purpose of the Lord, how the Lord is compassionate and merciful.

12 But above all, my brothers, do not swear, either by heaven or by earth or by any other oath, but let your “yes” be yes and your “no” be no, so that you may not fall under condemnation.

4 We must work the works of him who sent me while it is day; night is coming, when no one can work. 5 As long as I am in the world, I am the light of the world.”

13 “You are the salt of the earth, but if salt has lost its taste, how shall its saltiness be restored? It is no longer good for anything except to be thrown out and trampled under people’s feet.

14 “You are the light of the world. A city set on a hill cannot be hidden. 15 Nor do people light a lamp and put it under a basket, but on a stand, and it gives light to all in the house. 16 In the same way, let your light shine before others, so that they may see your good works and give glory to your Father who is in heaven.

28 And when he had said these things, he went on ahead, going up to Jerusalem.29 When he drew near to Bethphage and Bethany, at the mount that is called Olivet, he sent two of the disciples, 30 saying, “Go into the village in front of you, where on entering you will find a colt tied, on which no one has ever yet sat. Untie it and bring it here. 31 If anyone asks you, ‘Why are you untying it?’ you shall say this: ‘The Lord has need of it.’” 32 So those who were sent went away and found it just as he had told them. 33 And as they were untying the colt, its owners said to them, “Why are you untying the colt?” 34 And they said, “The Lord has need of it.”35 And they brought it to Jesus, and throwing their cloaks on the colt, they set Jesus on it. 36 And as he rode along, they spread their cloaks on the road. 37 As he was drawing near—already on the way down the Mount of Olives—the whole multitude of his disciples began to rejoice and praise God with a loud voice for all the mighty works that they had seen, 38 saying, “Blessed is the King who comes in the name of the Lord! Peace in heaven and glory in the highest!” 39 And some of the Pharisees in the crowd said to him, “Teacher, rebuke your disciples.” 40 He answered, “I tell you, if these were silent, the very stones would cry out.”

41 And when he drew near and saw the city, he wept over it, 42 saying, “Would that you, even you, had known on this day the things that make for peace! But now they are hidden from your eyes. 43 For the days will come upon you, when your enemies will set up a barricade around you and surround you and hem you in on every side 44 and tear you down to the ground, you and your children within you. And they will not leave one stone upon another in you, because you did not know the time of your visitation.”