RESTING IN THE SOVEREIGNTY OF GOD 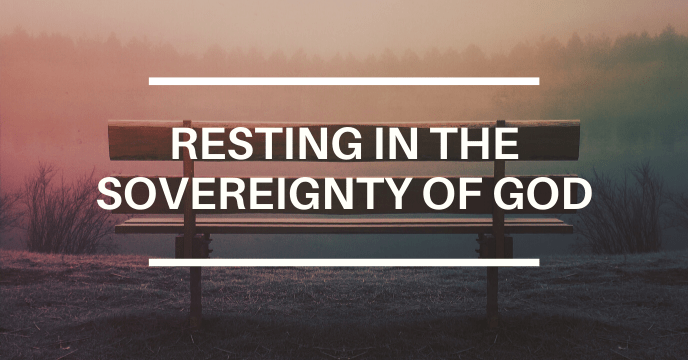 20 As for you, you meant evil against me, but God meant it for good, to bring it about that many people should be kept alive, as they are today.

Paul’s Concern for the Galatians

8 Formerly, when you did not know God, you were enslaved to those that by nature are not gods. 9 But now that you have come to know God, or rather to be known by God, how can you turn back again to the weak and worthless elementary principles of the world, whose slaves you want to be once more? 10 You observe days and months and seasons and years! 11 I am afraid I may have labored over you in vain.

12 Brothers, I entreat you, become as I am, for I also have become as you are. You did me no wrong. 13 You know it was because of a bodily ailment that I preached the gospel to you at first, 14 and though my condition was a trial to you, you did not scorn or despise me, but received me as an angel of God, as Christ Jesus. 15 What then has become of your blessedness? For I testify to you that, if possible, you would have gouged out your eyes and given them to me. 16 Have I then become your enemy by telling you the truth? 17 They make much of you, but for no good purpose. They want to shut you out, that you may make much of them. 18 It is always good to be made much of for a good purpose, and not only when I am present with you, 19 my little children, for whom I am again in the anguish of childbirth until Christ is formed in you! 20 I wish I could be present with you now and change my tone, for I am perplexed about you.

16 When he summoned a famine on the land
and broke all supply of bread,
17 he had sent a man ahead of them,
Joseph, who was sold as a slave.
18 His feet were hurt with fetters;
his neck was put in a collar of iron;
19 until what he had said came to pass,
the word of the Lord tested him.
20 The king sent and released him;
the ruler of the peoples set him free;
21 he made him lord of his house
and ruler of all his possessions,
22 to bind his princes at his pleasure
and to teach his elders wisdom.

22 “Joseph is a fruitful bough,
a fruitful bough by a spring;
his branches run over the wall.
23 The archers bitterly attacked him,
shot at him, and harassed him severely,
24 yet his bow remained unmoved;
his arms were made agile
by the hands of the Mighty One of Jacob
(from there is the Shepherd, the Stone of Israel),

14 But Peter, standing with the eleven, lifted up his voice and addressed them: “Men of Judea and all who dwell in Jerusalem, let this be known to you, and give ear to my words. 15 For these people are not drunk, as you suppose, since it is only the third hour of the day. 16 But this is what was uttered through the prophet Joel:

17 “‘And in the last days it shall be, God declares,
that I will pour out my Spirit on all flesh,
and your sons and your daughters shall prophesy,
and your young men shall see visions,
and your old men shall dream dreams;
18 even on my male servants and female servants
in those days I will pour out my Spirit, and they shall prophesy.
19 And I will show wonders in the heavens above
and signs on the earth below,
blood, and fire, and vapor of smoke;
20 the sun shall be turned to darkness
and the moon to blood,
before the day of the Lord comes, the great and magnificent day.
21 And it shall come to pass that everyone who calls upon the name of the Lord shall be saved.’

22 “Men of Israel, hear these words: Jesus of Nazareth, a man attested to you by God with mighty works and wonders and signs that God did through him in your midst, as you yourselves know— 23 this Jesus, delivered up according to the definite plan and foreknowledge of God, you crucified and killed by the hands of lawless men. 24 God raised him up, loosing the pangs of death, because it was not possible for him to be held by it. 25 For David says concerning him,

“‘I saw the Lord always before me,
for he is at my right hand that I may not be shaken;
26 therefore my heart was glad, and my tongue rejoiced;
my flesh also will dwell in hope.
27 For you will not abandon my soul to Hades,
or let your Holy One see corruption.
28 You have made known to me the paths of life;
you will make me full of gladness with your presence.’

29 “Brothers, I may say to you with confidence about the patriarch David that he both died and was buried, and his tomb is with us to this day. 30 Being therefore a prophet, and knowing that God had sworn with an oath to him that he would set one of his descendants on his throne, 31 he foresaw and spoke about the resurrection of the Christ, that he was not abandoned to Hades, nor did his flesh see corruption. 32 This Jesus God raised up, and of that we all are witnesses.33 Being therefore exalted at the right hand of God, and having received from the Father the promise of the Holy Spirit, he has poured out this that you yourselves are seeing and hearing. 34 For David did not ascend into the heavens, but he himself says,

“‘The Lord said to my Lord,
“Sit at my right hand,
35 until I make your enemies your footstool.”’

36 Let all the house of Israel therefore know for certain that God has made him both Lord and Christ, this Jesus whom you crucified.”

37 Now when they heard this they were cut to the heart, and said to Peter and the rest of the apostles, “Brothers, what shall we do?” 38 And Peter said to them, “Repent and be baptized every one of you in the name of Jesus Christ for the forgiveness of your sins, and you will receive the gift of the Holy Spirit. 39 For the promise is for you and for your children and for all who are far off, everyone whom the Lord our God calls to himself.” 40 And with many other words he bore witness and continued to exhort them, saying, “Save yourselves from this crooked generation.” 41 So those who received his word were baptized, and there were added that day about three thousand souls.