LOOKING TO JESUS IN QUARANTINE 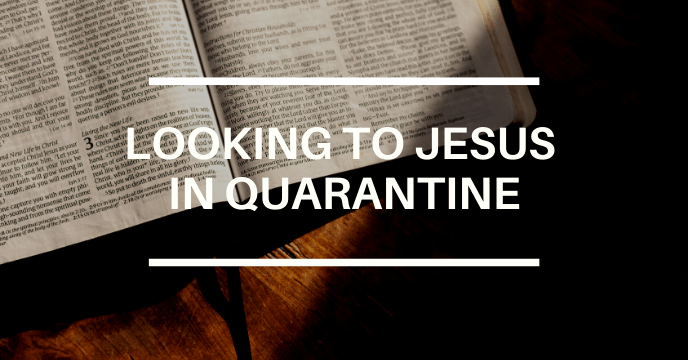 Vision of the Son of Man

9 I, John, your brother and partner in the tribulation and the kingdom and the patient endurance that are in Jesus, was on the island called Patmos on account of the word of God and the testimony of Jesus. 10 I was in the Spirit on the Lord’s day, and I heard behind me a loud voice like a trumpet 11 saying, “Write what you see in a book and send it to the seven churches, to Ephesus and to Smyrna and to Pergamum and to Thyatira and to Sardis and to Philadelphia and to Laodicea.”

12 Then I turned to see the voice that was speaking to me, and on turning I saw seven golden lampstands, 13 and in the midst of the lampstands one like a son of man, clothed with a long robe and with a golden sash around his chest. 14 The hairs of his head were white, like white wool, like snow. His eyes were like a flame of fire, 15 his feet were like burnished bronze, refined in a furnace, and his voice was like the roar of many waters. 16 In his right hand he held seven stars, from his mouth came a sharp two-edged sword, and his face was like the sun shining in full strength.

17 When I saw him, I fell at his feet as though dead. But he laid his right hand on me, saying, “Fear not, I am the first and the last, 18 and the living one. I died, and behold I am alive forevermore, and I have the keys of Death and Hades. 19 Write therefore the things that you have seen, those that are and those that are to take place after this. 20 As for the mystery of the seven stars that you saw in my right hand, and the seven golden lampstands, the seven stars are the angels of the seven churches, and the seven lampstands are the seven churches.

Besides Me There Is No God

6 Thus says the Lord, the King of Israel
and his Redeemer, the Lord of hosts:
“I am the first and I am the last;
besides me there is no god.

To the Church in Thyatira

18 “And to the angel of the church in Thyatira write: ‘The words of the Son of God, who has eyes like a flame of fire, and whose feet are like burnished bronze.

19 “‘I know your works, your love and faith and service and patient endurance, and that your latter works exceed the first. 20 But I have this against you, that you tolerate that woman Jezebel, who calls herself a prophetess and is teaching and seducing my servants to practice sexual immorality and to eat food sacrificed to idols. 21 I gave her time to repent, but she refuses to repent of her sexual immorality. 22 Behold, I will throw her onto a sickbed, and those who commit adultery with her I will throw into great tribulation, unless they repent of her works,23 and I will strike her children dead. And all the churches will know that I am he who searches mind and heart, and I will give to each of you according to your works. 24 But to the rest of you in Thyatira, who do not hold this teaching, who have not learned what some call the deep things of Satan, to you I say, I do not lay on you any other burden. 25 Only hold fast what you have until I come. 26 The one who conquers and who keeps my works until the end, to him I will give authority over the nations, 27 and he will rule them with a rod of iron, as when earthen pots are broken in pieces, even as I myself have received authority from my Father.28 And I will give him the morning star. 29 He who has an ear, let him hear what the Spirit says to the churches.’

The Word of Life

1 That which was from the beginning, which we have heard, which we have seen with our eyes, which we looked upon and have touched with our hands, concerning the word of life— 2 the life was made manifest, and we have seen it, and testify to it and proclaim to you the eternal life, which was with the Father and was made manifest to us— 3 that which we have seen and heard we proclaim also to you, so that you too may have fellowship with us; and indeed our fellowship is with the Father and with his Son Jesus Christ. 4 And we are writing these things so that our joy may be complete.

To the Church in Smyrna

8 “And to the angel of the church in Smyrna write: ‘The words of the first and the last, who died and came to life.

9 “‘I know your tribulation and your poverty (but you are rich) and the slander  of those who say that they are Jews and are not, but are a synagogue of Satan. 10 Do not fear what you are about to suffer. Behold, the devil is about to throw some of you into prison, that you may be tested, and for ten days you will have tribulation. Be faithful unto death, and I will give you the crown of life. 11 He who has an ear, let him hear what the Spirit says to the churches. The one who conquers will not be hurt by the second death.’

The Marriage Supper of the Lamb

6 Then I heard what seemed to be the voice of a great multitude, like the roar of many waters and like the sound of mighty peals of thunder, crying out,

“Hallelujah!
For the Lord our God
the Almighty reigns.
7 Let us rejoice and exult
and give him the glory,
for the marriage of the Lamb has come,
and his Bride has made herself ready;
8 it was granted her to clothe herself
with fine linen, bright and pure”—

for the fine linen is the righteous deeds of the saints.

8 I, John, am the one who heard and saw these things. And when I heard and saw them, I fell down to worship at the feet of the angel who showed them to me, 9 but he said to me, “You must not do that! I am a fellow servant with you and your brothers the prophets, and with those who keep the words of this book. Worship God.”