KNOWING THE ONE I BELIEVE IN 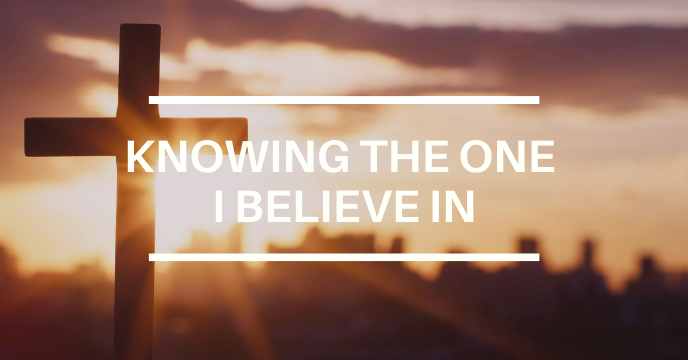 which is why I suffer as I do. But I am not ashamed, for I know whom I have believed, and I am convinced that he is able to guard until that day what has been entrusted to me.

20 Then the Lord said, “Because the outcry against Sodom and Gomorrah is great and their sin is very grave, 21 I will go down to see whether they have done altogether according to the outcry that has come to me. And if not, I will know.”

Do not grumble against one another, brothers, so that you may not be judged; behold, the Judge is standing at the door.

5 Then David’s anger was greatly kindled against the man, and he said to Nathan, “As the Lord lives, the man who has done this deserves to die, 6 and he shall restore the lamb fourfold, because he did this thing, and because he had no pity.”

7 Nathan said to David, “You are the man! Thus says the Lord, the God of Israel, ‘I anointed you king over Israel, and I delivered you out of the hand of Saul. 8 And I gave you your master’s house and your master’s wives into your arms and gave you the house of Israel and of Judah. And if this were too little, I would add to you as much more. 9 Why have you despised the word of the Lord, to do what is evil in his sight? You have struck down Uriah the Hittite with the sword and have taken his wife to be your wife and have killed him with the sword of the Ammonites. 10 Now therefore the sword shall never depart from your house, because you have despised me and have taken the wife of Uriah the Hittite to be your wife.’ 11 Thus says the Lord, ‘Behold, I will raise up evil against you out of your own house. And I will take your wives before your eyes and give them to your neighbor, and he shall lie with your wives in the sight of this sun. 12 For you did it secretly, but I will do this thing before all Israel and before the sun.’” 13 David said to Nathan, “I have sinned against the Lord.” And Nathan said to David, “The Lord also has put away your sin; you shall not die.

But when David saw that his servants were whispering together, David understood that the child was dead. And David said to his servants, “Is the child dead?” They said, “He is dead.”

But Jonadab son of Shimeah, David’s brother, said, “My lord should not think that they killed all the princes; only Amnon is dead. This has been Absalom’s express intention ever since the day Amnon raped his sister Tamar.

14 Joab said, “I will not waste time like this with you.” And he took three javelins in his hand and thrust them into the heart of Absalom while he was still alive in the oak.15 And ten young men, Joab’s armor-bearers, surrounded Absalom and struck him and killed him.

24 Now therefore as the Lord lives, who has established me and placed me on the throne of David my father, and who has made me a house, as he promised, Adonijah shall be put to death today.” 25 So King Solomon sent Benaiah the son of Jehoiada, and he struck him down, and he died.

The Lord‘s Judgment of David’s Sin

10 But David’s heart struck him after he had numbered the people. And David said to the Lord, “I have sinned greatly in what I have done. But now, O Lord, please take away the iniquity of your servant, for I have done very foolishly.” 11 And when David arose in the morning, the word of the Lord came to the prophet Gad, David’s seer, saying, 12 “Go and say to David, ‘Thus says the Lord, Three things I offer you. Choose one of them, that I may do it to you.’” 13 So Gad came to David and told him, and said to him, “Shall three years of famine come to you in your land? Or will you flee three months before your foes while they pursue you? Or shall there be three days’ pestilence in your land? Now consider, and decide what answer I shall return to him who sent me.” 14 Then David said to Gad, “I am in great distress. Let us fall into the hand of the Lord, for his mercy is great; but let me not fall into the hand of man.”

15 So the Lord sent a pestilence on Israel from the morning until the appointed time. And there died of the people from Dan to Beersheba 70,000 men.

10 And the Lord said, “You pity the plant, for which you did not labor, nor did you make it grow, which came into being in a night and perished in a night. 11 And should not I pity Nineveh, that great city, in which there are more than 120,000 persons who do not know their right hand from their left, and also much cattle?”

14 If I then, your Lord and Teacher, have washed your feet, you also ought to wash one another’s feet. 15 For I have given you an example, that you also should do just as I have done to you. 16 Truly, truly, I say to you, a servant is not greater than his master, nor is a messenger greater than the one who sent him. 17 If you know these things, blessed are you if you do them.

27 Just then his disciples came back. They marveled that He was talking with a woman, but no one said, “What do you seek?” or, “Why are you talking with her?” 28 So the woman left her water jar and went away into town and said to the people, 29 “Come, see a man who told me all that I ever did. Can this be the Christ?” 30 They went out of the town and were coming to him.

31 Meanwhile the disciples were urging him, saying, “Rabbi, eat.”

And her husband Joseph, being a just man and unwilling to put her to shame, resolved to divorce her quietly.

I lay down and slept;
I woke again, for the Lord sustained me.

And when they have finished their testimony, the beast that rises from the bottomless pit will make war on them and conquer them and kill them…