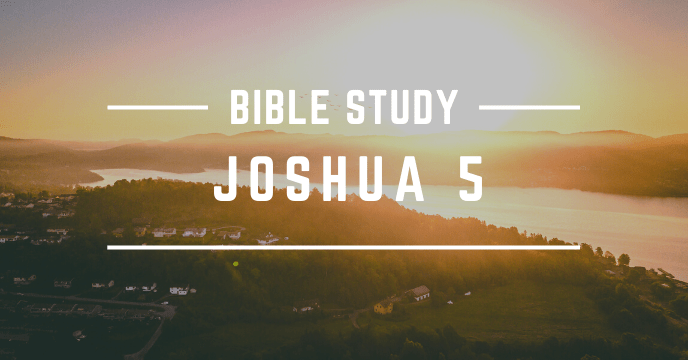 8 When the circumcising of the whole nation was finished, they remained in their places in the camp until they were healed. 9 And the Lord said to Joshua, “Today I have rolled away the reproach of Egypt from you.” And so the name of that place is called Gilgal to this day.

The Commander of the Lord‘s Army

13 When Joshua was by Jericho, he lifted up his eyes and looked, and behold, a man was standing before him with his drawn sword in his hand. And Joshua went to him and said to him, “Are you for us, or for our adversaries?” 14 And he said, “No; but I am the commander of the army of the Lord. Now I have come.” And Joshua fell on his face to the earth and worshiped and said to him, “What does my lord say to his servant?” 15 And the commander of the Lord’s army said to Joshua, “Take off your sandals from your feet, for the place where you are standing is holy.” And Joshua did so.

11 And as soon as we heard it, our hearts melted, and there was no spirit left in any man because of you, for the Lord your God, he is God in the heavens above and on the earth beneath. 12 Now then, please swear to me by the Lord that, as I have dealt kindly with you, you also will deal kindly with my father’s house, and give me a sure sign 13 that you will save alive my father and mother, my brothers and sisters, and all who belong to them, and deliver our lives from death.”

24 so that all the peoples of the earth may know that the hand of the Lord is mighty, that you may fear the Lord your God forever.”

4 But with you there is forgiveness,

that you may be feared.

13 The sons of Jacob answered Shechem and his father Hamor deceitfully, because he had defiled their sister Dinah. 14 They said to them, “We cannot do this thing, to give our sister to one who is uncircumcised, for that would be a disgrace to us. 15 Only on this condition will we agree with you—that you will become as we are by every male among you being circumcised. 16 Then we will give our daughters to you, and we will take your daughters to ourselves, and we will dwell with you and become one people. 17 But if you will not listen to us and be circumcised, then we will take our daughter, and we will be gone.”

18 Their words pleased Hamor and Hamor’s son Shechem. 19 And the young man did not delay to do the thing, because he delighted in Jacob’s daughter. Now he was the most honored of all his father’s house. 20 So Hamor and his son Shechem came to the gate of their city and spoke to the men of their city, saying, 21 “These men are at peace with us; let them dwell in the land and trade in it, for behold, the land is large enough for them. Let us take their daughters as wives, and let us give them our daughters. 22 Only on this condition will the men agree to dwell with us to become one people—when every male among us is circumcised as they are circumcised. 23 Will not their livestock, their property and all their beasts be ours? Only let us agree with them, and they will dwell with us.” 24 And all who went out of the gate of his city listened to Hamor and his son Shechem, and every male was circumcised, all who went out of the gate of his city.

25 On the third day, when they were sore, two of the sons of Jacob, Simeon and Levi, Dinah’s brothers, took their swords and came against the city while it felt secure and killed all the males. 26 They killed Hamor and his son Shechem with the sword and took Dinah out of Shechem’s house and went away. 27 The sons of Jacob came upon the slain and plundered the city, because they had defiled their sister. 28 They took their flocks and their herds, their donkeys, and whatever was in the city and in the field. 29 All their wealth, all their little ones and their wives, all that was in the houses, they captured and plundered.

21 Now when they drew near to Jerusalem and came to Bethphage, to the Mount of Olives, then Jesus sent two disciples, 2 saying to them, “Go into the village in front of you, and immediately you will find a donkey tied, and a colt with her. Untie them and bring them to me. 3 If anyone says anything to you, you shall say, ‘The Lord needs them,’ and he will send them at once.”

3 Now Moses was keeping the flock of his father-in-law, Jethro, the priest of Midian, and he led his flock to the west side of the wilderness and came to Horeb, the mountain of God. 2 And the angel of the Lord appeared to him in a flame of fire out of the midst of a bush. He looked, and behold, the bush was burning, yet it was not consumed. 3 And Moses said, “I will turn aside to see this great sight, why the bush is not burned.” 4 When the Lord saw that he turned aside to see, God called to him out of the bush, “Moses, Moses!” And he said, “Here I am.” 5 Then he said, “Do not come near; take your sandals off your feet, for the place on which you are standing is holy ground.” 6 And he said, “I am the God of your father, the God of Abraham, the God of Isaac, and the God of Jacob.” And Moses hid his face, for he was afraid to look at God.