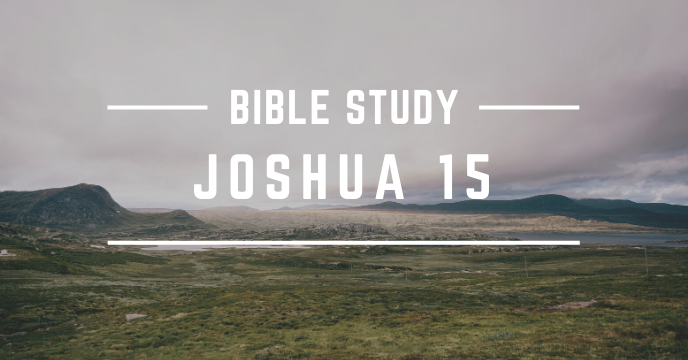 21 that is, all the cities of the tableland, and all the kingdom of Sihon king of the Amorites, who reigned in Heshbon, whom Moses defeated with the leaders of Midian, Evi and Rekem and Zur and Hur and Reba, the princes of Sihon, who lived in the land.

The Inheritance West of the Jordan

14 These are the inheritances that the people of Israel received in the land of Canaan, which Eleazar the priest and Joshua the son of Nun and the heads of the fathers’ houses of the tribes of the people of Israel gave them to inherit. 2 Their inheritance was by lot, just as the Lord had commanded by the hand of Moses for the nine and one-half tribes. 3 For Moses had given an inheritance to the two and one-half tribes beyond the Jordan, but to the Levites he gave no inheritance among them. 4 For the people of Joseph were two tribes, Manasseh and Ephraim. And no portion was given to the Levites in the land, but only cities to dwell in, with their pasturelands for their livestock and their substance. 5 The people of Israel did as the Lord commanded Moses; they allotted the land.

6 Then the people of Judah came to Joshua at Gilgal. And Caleb the son of Jephunneh the Kenizzite said to him, “You know what the Lord said to Moses the man of God in Kadesh-barnea concerning you and me. 7 I was forty years old when Moses the servant of the Lord sent me from Kadesh-barnea to spy out the land, and I brought him word again as it was in my heart. 8 But my brothers who went up with me made the heart of the people melt; yet I wholly followed the Lordmy God. 9 And Moses swore on that day, saying, ‘Surely the land on which your foot has trodden shall be an inheritance for you and your children forever, because you have wholly followed the Lord my God.’ 10 And now, behold, the Lord has kept me alive, just as he said, these forty-five years since the time that the Lord spoke this word to Moses, while Israel walked in the wilderness. And now, behold, I am this day eighty-five years old. 11 I am still as strong today as I was in the day that Moses sent me; my strength now is as my strength was then, for war and for going and coming. 12 So now give me this hill country of which the Lord spoke on that day, for you heard on that day how the Anakim were there, with great fortified cities. It may be that the Lord will be with me, and I shall drive them out just as the Lord said.”

13 Then Joshua blessed him, and he gave Hebron to Caleb the son of Jephunneh for an inheritance. 14 Therefore Hebron became the inheritance of Caleb the son of Jephunneh the Kenizzite to this day, because he wholly followed the Lord, the God of Israel. 15 Now the name of Hebron formerly was Kiriath-arba. (Arba was the greatest man among the Anakim.) And the land had rest from war.

The Allotment for Judah

13 According to the commandment of the Lord to Joshua, he gave to Caleb the son of Jephunneh a portion among the people of Judah, Kiriath-arba, that is, Hebron (Arba was the father of Anak). 14 And Caleb drove out from there the three sons of Anak, Sheshai and Ahiman and Talmai, the descendants of Anak. 15 And he went up from there against the inhabitants of Debir. Now the name of Debir formerly was Kiriath-sepher. 16 And Caleb said, “Whoever strikes Kiriath-sepher and captures it, to him will I give Achsah my daughter as wife.” 17 And Othniel the son of Kenaz, the brother of Caleb, captured it. And he gave him Achsah his daughter as wife. 18 When she came to him, she urged him to ask her father for a field. And she got off her donkey, and Caleb said to her, “What do you want?”19 She said to him, “Give me a blessing. Since you have given me the land of the Negeb, give me also springs of water.” And he gave her the upper springs and the lower springs.

20 This is the inheritance of the tribe of the people of Judah according to their clans. 21 The cities belonging to the tribe of the people of Judah in the extreme south, toward the boundary of Edom, were Kabzeel, Eder, Jagur, 22 Kinah, Dimonah, Adadah, 23 Kedesh, Hazor, Ithnan, 24 Ziph, Telem, Bealoth, 25 Hazor-hadattah, Kerioth-hezron (that is, Hazor), 26 Amam, Shema, Moladah, 27 Hazar-gaddah, Heshmon, Beth-pelet, 28 Hazar-shual, Beersheba, Biziothiah, 29 Baalah, Iim, Ezem, 30 Eltolad, Chesil, Hormah, 31 Ziklag, Madmannah, Sansannah,32 Lebaoth, Shilhim, Ain, and Rimmon: in all, twenty-nine cities with their villages.

45 Ekron, with its towns and its villages; 46 from Ekron to the sea, all that were by the side of Ashdod, with their villages.

48 And in the hill country, Shamir, Jattir, Socoh, 49 Dannah, Kiriath-sannah (that is, Debir), 50 Anab, Eshtemoh, Anim, 51 Goshen, Holon, and Giloh: eleven cities with their villages.

60 Kiriath-baal (that is, Kiriath-jearim), and Rabbah: two cities with their villages.

18 The lot puts an end to quarrels
and decides between powerful contenders.

33 The lot is cast into the lap,
but its every decision is from the Lord.

12 Then they returned to Jerusalem from the mount called Olivet, which is near Jerusalem, a Sabbath day’s journey away. 13 And when they had entered, they went up to the upper room, where they were staying, Peter and John and James and Andrew, Philip and Thomas, Bartholomew and Matthew, James the son of Alphaeus and Simon the Zealot and Judas the son of James. 14 All these with one accord were devoting themselves to prayer, together with the women and Mary the mother of Jesus, and his brothers.

15 In those days Peter stood up among the brothers (the company of persons was in all about 120) and said, 16 “Brothers, the Scripture had to be fulfilled, which the Holy Spirit spoke beforehand by the mouth of David concerning Judas, who became a guide to those who arrested Jesus. 17 For he was numbered among us and was allotted his share in this ministry.” 18 (Now this man acquired a field with the reward of his wickedness, and falling headlong he burst open in the middle and all his bowels gushed out. 19 And it became known to all the inhabitants of Jerusalem, so that the field was called in their own language Akeldama, that is, Field of Blood.) 20 “For it is written in the Book of Psalms,

“‘May his camp become desolate,
and let there be no one to dwell in it’;

“‘Let another take his office.’

21 So one of the men who have accompanied us during all the time that the Lord Jesus went in and out among us, 22 beginning from the baptism of John until the day when he was taken up from us—one of these men must become with us a witness to his resurrection.” 23 And they put forward two, Joseph called Barsabbas, who was also called Justus, and Matthias. 24 And they prayed and said, “You, Lord, who know the hearts of all, show which one of these two you have chosen 25 to take the place in this ministry and apostleship from which Judas turned aside to go to his own place.” 26 And they cast lots for them, and the lot fell on Matthias, and he was numbered with the eleven apostles.

22 So Paul, standing in the midst of the Areopagus, said: “Men of Athens, I perceive that in every way you are very religious. 23 For as I passed along and observed the objects of your worship, I found also an altar with this inscription: ‘To the unknown god.’ What therefore you worship as unknown, this I proclaim to you.24 The God who made the world and everything in it, being Lord of heaven and earth, does not live in temples made by man, 25 nor is he served by human hands, as though he needed anything, since he himself gives to all mankind life and breath and everything. 26 And he made from one man every nation of mankind to live on all the face of the earth, having determined allotted periods and the boundaries of their dwelling place, 27 that they should seek God, and perhaps feel their way toward him and find him. Yet he is actually not far from each one of us,28 for

“‘In him we live and move and have our being’;

as even some of your own poets have said,

“‘For we are indeed his offspring.’

29 Being then God’s offspring, we ought not to think that the divine being is like gold or silver or stone, an image formed by the art and imagination of man. 30 The times of ignorance God overlooked, but now he commands all people everywhere to repent, 31 because he has fixed a day on which he will judge the world in righteousness by a man whom he has appointed; and of this he has given assurance to all by raising him from the dead.”

32 Now when they heard of the resurrection of the dead, some mocked. But others said, “We will hear you again about this.” 33 So Paul went out from their midst.34 But some men joined him and believed, among whom also were Dionysius the Areopagite and a woman named Damaris and others with them.

23 He makes nations great, and he destroys them;
he enlarges nations, and leads them away.

5 Since his days are determined,
and the number of his months is with you,
and you have appointed his limits that he cannot pass,

21 So they went up and spied out the land from the wilderness of Zin to Rehob, near Lebo-hamath. 22 They went up into the Negeb and came to Hebron. Ahiman, Sheshai, and Talmai, the descendants of Anak, were there. (Hebron was built seven years before Zoan in Egypt.) 23 And they came to the Valley of Eshcol and cut down from there a branch with a single cluster of grapes, and they carried it on a pole between two of them; they also brought some pomegranates and figs.24 That place was called the Valley of Eshcol, because of the cluster that the people of Israel cut down from there.

22 Like a gold ring in a pig’s snout
is a beautiful woman without discretion.