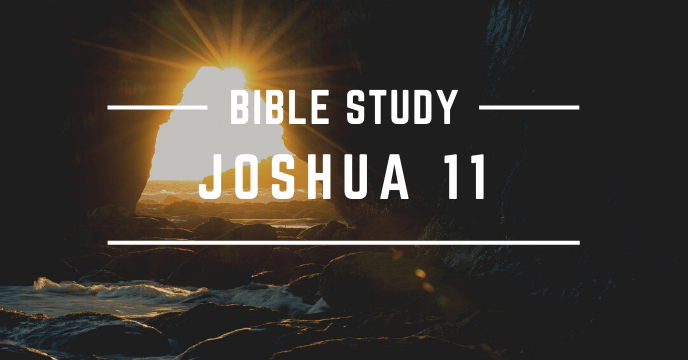 11 And as they fled before Israel, while they were going down the ascent of Beth-horon, the Lord threw down large stones from heaven on them as far as Azekah, and they died. There were more who died because of the hailstones than the sons of Israel killed with the sword.

12 At that time Joshua spoke to the Lord in the day when the Lord gave the Amorites over to the sons of Israel, and he said in the sight of Israel,

“Sun, stand still at Gibeon,
and moon, in the Valley of Aijalon.”
13 And the sun stood still, and the moon stopped,
until the nation took vengeance on their enemies.

Is this not written in the Book of Jashar? The sun stopped in the midst of heaven and did not hurry to set for about a whole day. 14 There has been no day like it before or since, when the Lord heeded the voice of a man, for the Lord fought for Israel.

15 So Joshua returned, and all Israel with him, to the camp at Gilgal.

16 These five kings fled and hid themselves in the cave at Makkedah. 17 And it was told to Joshua, “The five kings have been found, hidden in the cave at Makkedah.”18 And Joshua said, “Roll large stones against the mouth of the cave and set men by it to guard them, 19 but do not stay there yourselves. Pursue your enemies; attack their rear guard. Do not let them enter their cities, for the Lord your God has given them into your hand.” 20 When Joshua and the sons of Israel had finished striking them with a great blow until they were wiped out, and when the remnant that remained of them had entered into the fortified cities, 21 then all the people returned safe to Joshua in the camp at Makkedah. Not a man moved his tongue against any of the people of Israel.

22 Then Joshua said, “Open the mouth of the cave and bring those five kings out to me from the cave.” 23 And they did so, and brought those five kings out to him from the cave, the king of Jerusalem, the king of Hebron, the king of Jarmuth, the king of Lachish, and the king of Eglon. 24 And when they brought those kings out to Joshua, Joshua summoned all the men of Israel and said to the chiefs of the men of war who had gone with him, “Come near; put your feet on the necks of these kings.” Then they came near and put their feet on their necks. 25 And Joshua said to them, “Do not be afraid or dismayed; be strong and courageous. For thus the Lord will do to all your enemies against whom you fight.” 26 And afterward Joshua struck them and put them to death, and he hanged them on five trees. And they hung on the trees until evening. 27 But at the time of the going down of the sun, Joshua commanded, and they took them down from the trees and threw them into the cave where they had hidden themselves, and they set large stones against the mouth of the cave, which remain to this very day.

28 As for Makkedah, Joshua captured it on that day and struck it, and its king, with the edge of the sword. He devoted to destruction every person in it; he left none remaining. And he did to the king of Makkedah just as he had done to the king of Jericho.

29 Then Joshua and all Israel with him passed on from Makkedah to Libnah and fought against Libnah. 30 And the Lord gave it also and its king into the hand of Israel. And he struck it with the edge of the sword, and every person in it; he left none remaining in it. And he did to its king as he had done to the king of Jericho.

31 Then Joshua and all Israel with him passed on from Libnah to Lachish and laid siege to it and fought against it. 32 And the Lord gave Lachish into the hand of Israel, and he captured it on the second day and struck it with the edge of the sword, and every person in it, as he had done to Libnah.

33 Then Horam king of Gezer came up to help Lachish. And Joshua struck him and his people, until he left none remaining.

34 Then Joshua and all Israel with him passed on from Lachish to Eglon. And they laid siege to it and fought against it. 35 And they captured it on that day, and struck it with the edge of the sword. And he devoted every person in it to destruction that day, as he had done to Lachish.

36 Then Joshua and all Israel with him went up from Eglon to Hebron. And they fought against it 37 and captured it and struck it with the edge of the sword, and its king and its towns, and every person in it. He left none remaining, as he had done to Eglon, and devoted it to destruction and every person in it.

38 Then Joshua and all Israel with him turned back to Debir and fought against it39 and he captured it with its king and all its towns. And they struck them with the edge of the sword and devoted to destruction every person in it; he left none remaining. Just as he had done to Hebron and to Libnah and its king, so he did to Debir and to its king.

40 So Joshua struck the whole land, the hill country and the Negeb and the lowland and the slopes, and all their kings. He left none remaining, but devoted to destruction all that breathed, just as the Lord God of Israel commanded. 41 And Joshua struck them from Kadesh-barnea as far as Gaza, and all the country of Goshen, as far as Gibeon. 42 And Joshua captured all these kings and their land at one time, because the Lord God of Israel fought for Israel. 43 Then Joshua returned, and all Israel with him, to the camp at Gilgal.

11 When Jabin, king of Hazor, heard of this, he sent to Jobab king of Madon, and to the king of Shimron, and to the king of Achshaph, 2 and to the kings who were in the northern hill country, and in the Arabah south of Chinneroth, and in the lowland, and in Naphoth-dor on the west, 3 to the Canaanites in the east and the west, the Amorites, the Hittites, the Perizzites, and the Jebusites in the hill country, and the Hivites under Hermon in the land of Mizpah. 4 And they came out with all their troops, a great horde, in number like the sand that is on the seashore, with very many horses and chariots. 5 And all these kings joined their forces and came and encamped together at the waters of Merom to fight against Israel.

6 And the Lord said to Joshua, “Do not be afraid of them, for tomorrow at this time I will give over all of them, slain, to Israel. You shall hamstring their horses and burn their chariots with fire.” 7 So Joshua and all his warriors came suddenly against them by the waters of Merom and fell upon them. 8 And the Lord gave them into the hand of Israel, who struck them and chased them as far as Great Sidon and Misrephoth-maim, and eastward as far as the Valley of Mizpeh. And they struck them until he left none remaining. 9 And Joshua did to them just as the Lord said to him: he hamstrung their horses and burned their chariots with fire.

10 And Joshua turned back at that time and captured Hazor and struck its king with the sword, for Hazor formerly was the head of all those kingdoms. 11 And they struck with the sword all who were in it, devoting them to destruction; there was none left that breathed. And he burned Hazor with fire. 12 And all the cities of those kings, and all their kings, Joshua captured, and struck them with the edge of the sword, devoting them to destruction, just as Moses the servant of the Lord had commanded. 13 But none of the cities that stood on mounds did Israel burn, except Hazor alone; that Joshua burned. 14 And all the spoil of these cities and the livestock, the people of Israel took for their plunder. But every person they struck with the edge of the sword until they had destroyed them, and they did not leave any who breathed. 15 Just as the Lord had commanded Moses his servant, so Moses commanded Joshua, and so Joshua did. He left nothing undone of all that the Lord had commanded Moses.

16 So Joshua took all that land, the hill country and all the Negeb and all the land of Goshen and the lowland and the Arabah and the hill country of Israel and its lowland 17 from Mount Halak, which rises toward Seir, as far as Baal-gad in the Valley of Lebanon below Mount Hermon. And he captured all their kings and struck them and put them to death. 18 Joshua made war a long time with all those kings. 19 There was not a city that made peace with the people of Israel except the Hivites, the inhabitants of Gibeon. They took them all in battle. 20 For it was the Lord‘s doing to harden their hearts that they should come against Israel in battle, in order that they should be devoted to destruction and should receive no mercy but be destroyed, just as the Lord commanded Moses.

21 And Joshua came at that time and cut off the Anakim from the hill country, from Hebron, from Debir, from Anab, and from all the hill country of Judah, and from all the hill country of Israel. Joshua devoted them to destruction with their cities.22 There was none of the Anakim left in the land of the people of Israel. Only in Gaza, in Gath, and in Ashdod did some remain. 23 So Joshua took the whole land, according to all that the Lord had spoken to Moses. And Joshua gave it for an inheritance to Israel according to their tribal allotments. And the land had rest from war.