HOW PAUL TOOK ADVANTAGE OF QUARANTINE 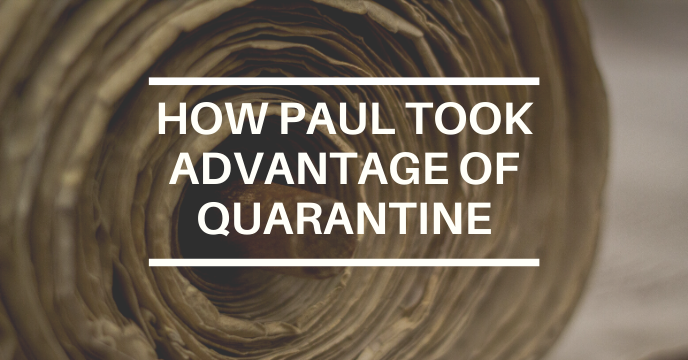 The Advance of the Gospel

12 I want you to know, brothers, that what has happened to me has really served to advance the gospel, 13 so that it has become known throughout the whole imperial guar  and to all the rest that my imprisonment is for Christ. 14 And most of the brothers, having become confident in the Lord by my imprisonment, are much more bold to speak the word without fear.

15 Some indeed preach Christ from envy and rivalry, but others from good will.16 The latter do it out of love, knowing that I am put here for the defense of the gospel. 17 The former proclaim Christ out of selfish ambition, not sincerely but thinking to afflict me in my imprisonment. 18 What then? Only that in every way, whether in pretense or in truth, Christ is proclaimed, and in that I rejoice.

15 For this reason, because I have heard of your faith in the Lord Jesus and your love toward all the saints, 16 I do not cease to give thanks for you, remembering you in my prayers, 17 that the God of our Lord Jesus Christ, the Father of glory, may give you the Spirit of wisdom and of revelation in the knowledge of him,18 having the eyes of your hearts enlightened, that you may know what is the hope to which he has called you, what are the riches of his glorious inheritance in the saints, 19 and what is the immeasurable greatness of his power toward us who believe, according to the working of his great might 20 that he worked in Christ when he raised him from the dead and seated him at his right hand in the heavenly places, 21 far above all rule and authority and power and dominion, and above every name that is named, not only in this age but also in the one to come. 22 And he put all things under his feet and gave him as head over all things to the church,23 which is his body, the fullness of him who fills all in all.

25 About midnight Paul and Silas were praying and singing hymns to God, and the prisoners were listening to them, 26 and suddenly there was a great earthquake, so that the foundations of the prison were shaken. And immediately all the doors were opened, and everyone’s bonds were unfastened. 27 When the jailer woke and saw that the prison doors were open, he drew his sword and was about to kill himself, supposing that the prisoners had escaped. 28 But Paul cried with a loud voice, “Do not harm yourself, for we are all here.” 29 And the jailer called for lights and rushed in, and trembling with fear he fell down before Paul and Silas. 30 Then he brought them out and said, “Sirs, what must I do to be saved?” 31 And they said, “Believe in the Lord Jesus, and you will be saved, you and your household.”32 And they spoke the word of the Lord to him and to all who were in his house.33 And he took them the same hour of the night and washed their wounds; and he was baptized at once, he and all his family. 34 Then he brought them up into his house and set food before them. And he rejoiced along with his entire household that he had believed in God.

35 But when it was day, the magistrates sent the police, saying, “Let those men go.” 36 And the jailer reported these words to Paul, saying, “The magistrates have sent to let you go. Therefore come out now and go in peace.” 37 But Paul said to them, “They have beaten us publicly, uncondemned, men who are Roman citizens, and have thrown us into prison; and do they now throw us out secretly? No! Let them come themselves and take us out.” 38 The police reported these words to the magistrates, and they were afraid when they heard that they were Roman citizens.39 So they came and apologized to them. And they took them out and asked them to leave the city. 40 So they went out of the prison and visited Lydia. And when they had seen the brothers, they encouraged them and departed.

5 For though I am absent in body, yet I am with you in spirit, rejoicing to see your good order and the firmness of your faith in Christ.

7 Tychicus will tell you all about my activities. He is a beloved brother and faithful minister and fellow servant in the Lord. 8 I have sent him to you for this very purpose, that you may know how we are and that he may encourage your hearts,9 and with him Onesimus, our faithful and beloved brother, who is one of you. They will tell you of everything that has taken place here.

10 Aristarchus my fellow prisoner greets you, and Mark the cousin of Barnabas (concerning whom you have received instructions—if he comes to you, welcome him), 11 and Jesus who is called Justus. These are the only men of the circumcision among my fellow workers for the kingdom of God, and they have been a comfort to me. 12 Epaphras, who is one of you, a servant of Christ Jesus, greets you, always struggling on your behalf in his prayers, that you may stand mature and fully assured in all the will of God. 13 For I bear him witness that he has worked hard for you and for those in Laodicea and in Hierapolis. 14 Luke the beloved physician greets you, as does Demas. 15 Give my greetings to the brothers at Laodicea, and to Nympha and the church in her house. 16 And when this letter has been read among you, have it also read in the church of the Laodiceans; and see that you also read the letter from Laodicea. 17 And say to Archippus, “See that you fulfill the ministry that you have received in the Lord.”

18 I, Paul, write this greeting with my own hand. Remember my chains. Grace be with you.

8 Accordingly, though I am bold enough in Christ to command you to do what is required, 9 yet for love’s sake I prefer to appeal to you—I, Paul, an old man and now a prisoner also for Christ Jesus— 10 I appeal to you for my child, Onesimus, whose father I became in my imprisonment. 11 (Formerly he was useless to you, but now he is indeed useful to you and to me.) 12 I am sending him back to you, sending my very heart. 13 I would have been glad to keep him with me, in order that he might serve me on your behalf during my imprisonment for the gospel,14 but I preferred to do nothing without your consent in order that your goodness might not be by compulsion but of your own accord. 15 For this perhaps is why he was parted from you for a while, that you might have him back forever, 16 no longer as a bondservant but more than a bondservant, as a beloved brother—especially to me, but how much more to you, both in the flesh and in the Lord.

17 So if you consider me your partner, receive him as you would receive me. 18 If he has wronged you at all, or owes you anything, charge that to my account. 19 I, Paul, write this with my own hand: I will repay it—to say nothing of your owing me even your own self. 20 Yes, brother, I want some benefit from you in the Lord. Refresh my heart in Christ.

21 Confident of your obedience, I write to you, knowing that you will do even more than I say. 22 At the same time, prepare a guest room for me, for I am hoping that through your prayers I will be graciously given to you.