ARE WE READY FOR PERSECUTION? 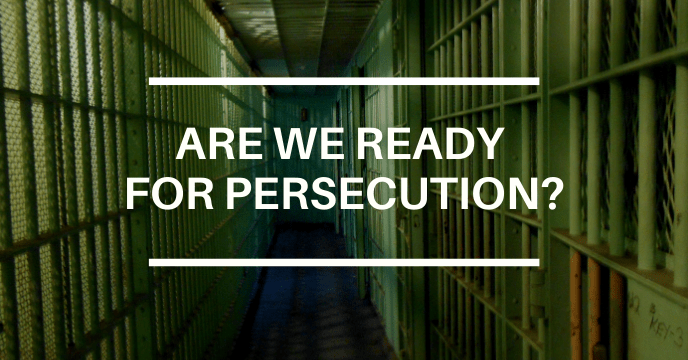 8 Now there arose a new king over Egypt, who did not know Joseph. 9 And he said to his people, “Behold, the people of Israel are too many and too mighty for us. 10 Come, let us deal shrewdly with them, lest they multiply, and, if war breaks out, they join our enemies and fight against us and escape from the land.” 11 Therefore they set taskmasters over them to afflict them with heavy burdens. They built for Pharaoh store cities, Pithom and Raamses. 12 But the more they were oppressed, the more they multiplied and the more they spread abroad. And the Egyptians were in dread of the people of Israel. 13 So they ruthlessly made the people of Israel work as slaves 14 and made their lives bitter with hard service, in mortar and brick, and in all kinds of work in the field. In all their work they ruthlessly made them work as slaves.

15 Then the king of Egypt said to the Hebrew midwives, one of whom was named Shiphrah and the other Puah, 16 “When you serve as midwife to the Hebrew women and see them on the birthstool, if it is a son, you shall kill him, but if it is a daughter, she shall live.” 17 But the midwives feared God and did not do as the king of Egypt commanded them, but let the male children live. 18 So the king of Egypt called the midwives and said to them, “Why have you done this, and let the male children live?” 19 The midwives said to Pharaoh, “Because the Hebrew women are not like the Egyptian women, for they are vigorous and give birth before the midwife comes to them.” 20 So God dealt well with the midwives. And the people multiplied and grew very strong. 21 And because the midwives feared God, he gave them families. 22 Then Pharaoh commanded all his people, “Every son that is born to the Hebrews[a] you shall cast into the Nile, but you shall let every daughter live.”

The Stoning of Stephen

54 Now when they heard these things they were enraged, and they ground their teeth at him. 55 But he, full of the Holy Spirit, gazed into heaven and saw the glory of God, and Jesus standing at the right hand of God. 56 And he said, “Behold, I see the heavens opened, and the Son of Man standing at the right hand of God.” 57 But they cried out with a loud voice and stopped their ears and rushed together at him. 58 Then they cast him out of the city and stoned him. And the witnesses laid down their garments at the feet of a young man named Saul. 59 And as they were stoning Stephen, he called out, “Lord Jesus, receive my spirit.” 60 And falling to his knees he cried out with a loud voice, “Lord, do not hold this sin against them.” And when he had said this, he fell asleep.

8 And Saul approved of his execution.

And there arose on that day a great persecution against the church in Jerusalem, and they were all scattered throughout the regions of Judea and Samaria, except the apostles. 2 Devout men buried Stephen and made great lamentation over him. 3 But Saul was ravaging the church, and entering house after house, he dragged off men and women and committed them to prison.

The Unmarried and the Widowed

36 If anyone thinks that he is not behaving properly toward his betrothed, if his passions are strong, and it has to be, let him do as he wishes: let them marry—it is no sin. 37 But whoever is firmly established in his heart, being under no necessity but having his desire under control, and has determined this in his heart, to keep her as his betrothed, he will do well. 38 So then he who marries his betrothed does well, and he who refrains from marriage will do even better.

39 A wife is bound to her husband as long as he lives. But if her husband dies, she is free to be married to whom she wishes, only in the Lord. 40 Yet in my judgment she is happier if she remains as she is. And I think that I too have the Spirit of God.