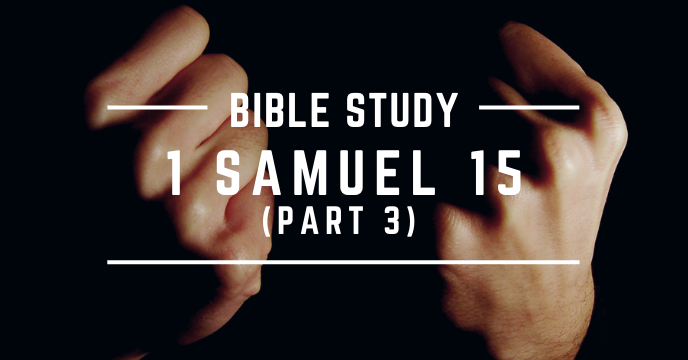 16 Then Samuel said to Saul, “Stop! I will tell you what the Lord said to me this night.” And he said to him, “Speak.”

17 And Samuel said, “Though you are little in your own eyes, are you not the head of the tribes of Israel? The Lord anointed you king over Israel.

The crucible is for silver, and the furnace is for gold,

and a man is tested by his praise.

The saying is trustworthy and deserving of full acceptance, that Christ Jesus came into the world to save sinners, of whom I am the foremost.

But with me it is a very small thing that I should be judged by you or by any human court. In fact, I do not even judge myself.

18 And the Lord sent you on a mission and said, ‘Go, devote to destruction the sinners, the Amalekites, and fight against them until they are consumed.’ 19 Why then did you not obey the voice of the Lord? Why did you pounce on the spoil and do what was evil in the sight of the Lord?”

The people pounced on the spoil and took sheep and oxen and calves and slaughtered them on the ground. And the people ate them with the blood.

5 Did he not himself say to me, ‘She is my sister’? And she herself said, ‘He is my brother.’ In the integrity of my heart and the innocence of my hands I have done this.”6 Then God said to him in the dream, “Yes, I know that you have done this in the integrity of your heart, and it was I who kept you from sinning against me. Therefore I did not let you touch her.

The one who rejects me and does not receive my words has a judge; the word that I have spoken will judge him on the last day.

20 And Saul said to Samuel, “I have obeyed the voice of the Lord. I have gone on the mission on which the Lord sent me. I have brought Agag the king of Amalek, and I have devoted the Amalekites to destruction. 21 But the people took of the spoil, sheep and oxen, the best of the things devoted to destruction, to sacrifice to the Lordyour God in Gilgal.” 22 And Samuel said,

“Has the Lord as great delight in burnt offerings and sacrifices,
as in obeying the voice of the Lord?
Behold, to obey is better than sacrifice,
and to listen than the fat of rams.
23 For rebellion is as the sin of divination,
and presumption is as iniquity and idolatry.
Because you have rejected the word of the Lord,
he has also rejected you from being king.”

19 And when they say to you, “Inquire of the mediums and the necromancers who chirp and mutter,” should not a people inquire of their God? Should they inquire of the dead on behalf of the living? 20 To the teaching and to the testimony! If they will not speak according to this word, it is because they have no dawn.

“If you love me, you will keep my commandments.

24 Saul said to Samuel, “I have sinned, for I have transgressed the commandment of the Lord and your words, because I feared the people and obeyed their voice. 25 Now therefore, please pardon my sin and return with me that I may bow before the Lord.”26 And Samuel said to Saul, “I will not return with you. For you have rejected the word of the Lord, and the Lord has rejected you from being king over Israel.” 27 As Samuel turned to go away, Saul seized the skirt of his robe, and it tore. 28 And Samuel said to him, “The Lord has torn the kingdom of Israel from you this day and has given it to a neighbor of yours, who is better than you. 29 And also the Glory of Israel will not lie or have regret, for he is not a man, that he should have regret.” 30 Then he said, “I have sinned; yet honor me now before the elders of my people and before Israel, and return with me, that I may bow before the Lord your God.” 31 So Samuel turned back after Saul, and Saul bowed before the Lord.

32 Then Samuel said, “Bring here to me Agag the king of the Amalekites.” And Agag came to him cheerfully. Agag said, “Surely the bitterness of death is past.” 33 And Samuel said, “As your sword has made women childless, so shall your mother be childless among women.” And Samuel hacked Agag to pieces before the Lord in Gilgal.

34 Then Samuel went to Ramah, and Saul went up to his house in Gibeah of Saul.35 And Samuel did not see Saul again until the day of his death, but Samuel grieved over Saul. And the Lord regretted that he had made Saul king over Israel.

The fear of man lays a snare,
but whoever trusts in the Lord is safe.

Because the sentence against an evil deed is not executed speedily, the heart of the children of man is fully set to do evil.

6 And the young man who told him said, “By chance I happened to be on Mount Gilboa, and there was Saul leaning on his spear, and behold, the chariots and the horsemen were close upon him. 7 And when he looked behind him, he saw me, and called to me. And I answered, ‘Here I am.’ 8 And he said to me, ‘Who are you?’ I answered him, ‘I am an Amalekite.’ 9 And he said to me, ‘Stand beside me and kill me, for anguish has seized me, and yet my life still lingers.’

If your right eye causes you to sin, tear it out and throw it away. For it is better that you lose one of your members than that your whole body be thrown into hell.

And if your eye causes you to sin, tear it out and throw it away. It is better for you to enter life with one eye than with two eyes to be thrown into the hell of fire.

After these things King Ahasuerus promoted Haman the Agagite, the son of Hammedatha, and advanced him and set his throne above all the officials who were with him.