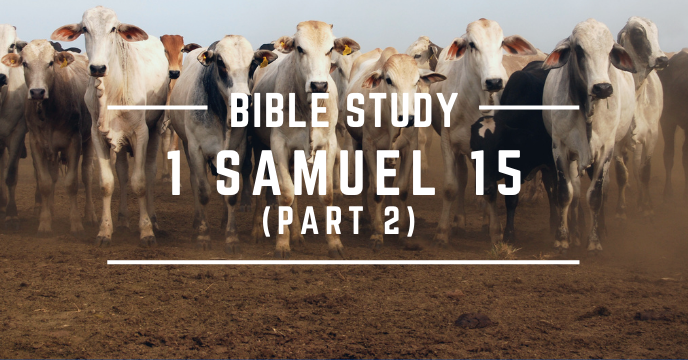 10 The word of the Lord came to Samuel: 11 “I regret that I have made Saul king, for he has turned back from following me and has not performed my commandments.” And Samuel was angry, and he cried to the Lord all night. 12 And Samuel rose early to meet Saul in the morning. And it was told Samuel, “Saul came to Carmel, and behold, he set up a monument for himself and turned and passed on and went down to Gilgal.”13 And Samuel came to Saul, and Saul said to him, “Blessed be you to the Lord. I have performed the commandment of the Lord.” 14 And Samuel said, “What then is this bleating of the sheep in my ears and the lowing of the oxen that I hear?” 15 Saul said, “They have brought them from the Amalekites, for the people spared the best of the sheep and of the oxen to sacrifice to the Lord your God, and the rest we have devoted to destruction.” 16 Then Samuel said to Saul, “Stop! I will tell you what the Lord said to me this night.” And he said to him, “Speak.”

And as soon as he came near the camp and saw the calf and the dancing, Moses’ anger burned hot, and he threw the tablets out of his hands and broke them at the foot of the mountain.

I did not sit in the company of revelers,
nor did I rejoice;
I sat alone, because your hand was upon me,
for you had filled me with indignation.

13 And Joshua overwhelmed Amalek and his people with the sword.

14 Then the Lord said to Moses, “Write this as a memorial in a book and recite it in the ears of Joshua, that I will utterly blot out the memory of Amalek from under heaven.”15 And Moses built an altar and called the name of it, The Lord Is My Banner..

I am the Lord; that is my name;
my glory I give to no other,
nor my praise to carved idols.

Even in your thoughts, do not curse the king,
nor in your bedroom curse the rich,
for a bird of the air will carry your voice,
or some winged creature tell the matter.

Whoever conceals his transgressions will not prosper,
but he who confesses and forsakes them will obtain mercy.

My little children, I am writing these things to you so that you may not sin. But if anyone does sin, we have an advocate with the Father, Jesus Christ the righteous.

Now David and his men went up and made raids against the Geshurites, the Girzites, and the Amalekites, for these were the inhabitants of the land from of old, as far as Shur, to the land of Egypt.