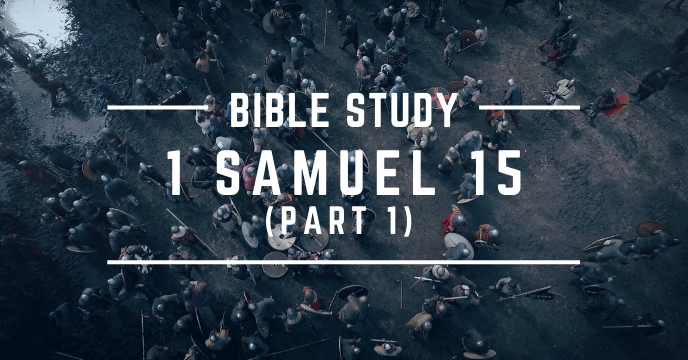 And Samuel said to Saul, “The Lord sent me to anoint you king over his people Israel; now therefore listen to the words of the Lord. 2 Thus says the Lord of hosts, ‘I have noted what Amalek did to Israel in opposing them on the way when they came up out of Egypt. 3 Now go and strike Amalek and devote to destruction all that they have. Do not spare them, but kill both man and woman, child and infant, ox and sheep, camel and donkey.’”

And he did valiantly and struck the Amalekites and delivered Israel out of the hands of those who plundered them.

Then Amalek came and fought with Israel at Rephidim.

17 “Remember what Amalek did to you on the way as you came out of Egypt, 18 how he attacked you on the way when you were faint and weary, and cut off your tail, those who were lagging behind you, and he did not fear God.

And they shall come back here in the fourth generation, for the iniquity of the Amorites is not yet complete.”

Behold, it was for my welfare
that I had great bitterness;
but in love you have delivered my life
from the pit of destruction,
for you have cast all my sins
behind your back.

4 So Saul summoned the people and numbered them in Telaim, two hundred thousand men on foot, and ten thousand men of Judah. 5 And Saul came to the city of Amalek and lay in wait in the valley. 6 Then Saul said to the Kenites, “Go, depart; go down from among the Amalekites, lest I destroy you with them. For you showed kindness to all the people of Israel when they came up out of Egypt.” So the Kenites departed from among the Amalekites. 7 And Saul defeated the Amalekites from Havilah as far as Shur, which is east of Egypt. 8 And he took Agag the king of the Amalekites alive and devoted to destruction all the people with the edge of the sword. 9 But Saul and the people spared Agag and the best of the sheep and of the oxen and of the fattened calves and the lambs, and all that was good, and would not utterly destroy them. All that was despised and worthless they devoted to destruction.

And the descendants of the Kenite, Moses’ father-in-law, went up with the people of Judah from the city of palms into the wilderness of Judah, which lies in the Negeb near Arad, and they went and settled with the people.

14 You have said, ‘It is vain to serve God. What is the profit of our keeping his charge or of walking as in mourning before the Lord of hosts? 15 And now we call the arrogant blessed. Evildoers not only prosper but they put God to the test and they escape.’”

The Book of Remembrance

4 Then I heard another voice from heaven saying,

“Come out of her, my people,
lest you take part in her sins,
lest you share in her plagues;
5 for her sins are heaped high as heaven,
and God has remembered her iniquities.

But now I am writing to you not to associate with anyone who bears the name of brother if he is guilty of sexual immorality or greed, or is an idolater, reviler, drunkard, or swindler—not even to eat with such a one.

“And a Redeemer will come to Zion,
to those in Jacob who turn from transgression,” declares the Lord.