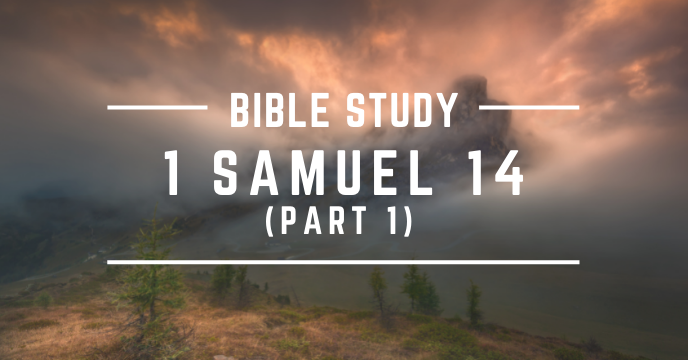 24 And the men of Israel had been hard pressed that day, so Saul had laid an oath on the people, saying, “Cursed be the man who eats food until it is evening and I am avenged on my enemies.” So none of the people had tasted food. 25 Now when all the people came to the forest, behold, there was honey on the ground. 26 And when the people entered the forest, behold, the honey was dropping, but no one put his hand to his mouth, for the people feared the oath. 27 But Jonathan had not heard his father charge the people with the oath, so he put out the tip of the staff that was in his hand and dipped it in the honeycomb and put his hand to his mouth, and his eyes became bright.

17 Let your foot be seldom in your neighbor’s house,
lest he have his fill of you and hate you.
18 A man who bears false witness against his neighbor
is like a war club, or a sword, or a sharp arrow.
19 Trusting in a treacherous man in time of trouble
is like a bad tooth or a foot that slips.
20 Whoever sings songs to a heavy heart
is like one who takes off a garment on a cold day,
and like vinegar on soda.

And David was greatly distressed, for the people spoke of stoning him, because all the people were bitter in soul, each for his sons and daughters. But David strengthened himself in the Lord his God.

28 Then one of the people said, “Your father strictly charged the people with an oath, saying, ‘Cursed be the man who eats food this day.’” And the people were faint.29 Then Jonathan said, “My father has troubled the land. See how my eyes have become bright because I tasted a little of this honey. 30 How much better if the people had eaten freely today of the spoil of their enemies that they found. For now the defeat among the Philistines has not been great.”

8 the precepts of the Lord are right,
rejoicing the heart;
the commandment of the Lord is pure,
enlightening the eyes;
9 the fear of the Lord is clean,
enduring forever;
the rules of the Lord are true,
and righteous altogether.
10 More to be desired are they than gold,
even much fine gold;
sweeter also than honey
and drippings of the honeycomb.

When Ahab saw Elijah, Ahab said to him, “Is it you, you troubler of Israel?

31 They struck down the Philistines that day from Michmash to Aijalon. And the people were very faint. 32 The people pounced on the spoil and took sheep and oxen and calves and slaughtered them on the ground. And the people ate them with the blood.33 Then they told Saul, “Behold, the people are sinning against the Lord by eating with the blood.” And he said, “You have dealt treacherously; roll a great stone to me here.”

They tie up heavy burdens, hard to bear,and lay them on people’s shoulders, but they themselves are not willing to move them with their finger.

“For my yoke is easy, and my burden is light.”

One person esteems one day as better than another, while another esteems all days alike. Each one should be fully convinced in his own mind.

34 And Saul said, “Disperse yourselves among the people and say to them, ‘Let every man bring his ox or his sheep and slaughter them here and eat, and do not sin against the Lord by eating with the blood.’” So every one of the people brought his ox with him that night and they slaughtered them there. 35 And Saul built an altar to the Lord; it was the first altar that he built to the Lord.

36 Then Saul said, “Let us go down after the Philistines by night and plunder them until the morning light; let us not leave a man of them.” And they said, “Do whatever seems good to you.” But the priest said, “Let us draw near to God here.” 37 And Saul inquired of God, “Shall I go down after the Philistines? Will you give them into the hand of Israel?” But he did not answer him that day. 38 And Saul said, “Come here, all you leaders of the people, and know and see how this sin has arisen today. 39 For as the Lord lives who saves Israel, though it be in Jonathan my son, he shall surely die.” But there was not a man among all the people who answered him. 40 Then he said to all Israel, “You shall be on one side, and I and Jonathan my son will be on the other side.” And the people said to Saul, “Do what seems good to you.” 41 Therefore Saul said, “O Lord God of Israel, why have you not answered your servant this day? If this guilt is in me or in Jonathan my son, O Lord, God of Israel, give Urim. But if this guilt is in your people Israel, give Thummim.” And Jonathan and Saul were taken, but the people escaped. 42 Then Saul said, “Cast the lot between me and my son Jonathan.” And Jonathan was taken.

43 Then Saul said to Jonathan, “Tell me what you have done.” And Jonathan told him, “I tasted a little honey with the tip of the staff that was in my hand. Here I am; I will die.” 44 And Saul said, “God do so to me and more also; you shall surely die, Jonathan.”45 Then the people said to Saul, “Shall Jonathan die, who has worked this great salvation in Israel? Far from it! As the Lord lives, there shall not one hair of his head fall to the ground, for he has worked with God this day.” So the people ransomed Jonathan, so that he did not die. 46 Then Saul went up from pursuing the Philistines, and the Philistines went to their own place.

And as soon as he saw her, he tore his clothes and said, “Alas, my daughter! You have brought me very low, and you have become the cause of great trouble to me. For I have opened my mouth to the Lord, and I cannot take back my vow.”

And they cast lots for them, and the lot fell on Matthias, and he was numbered with the eleven apostles.

It is not good to eat much honey,
nor is it glorious to seek one’s own glory.

but I have prayed for you that your faith may not fail. And when you have turned again, strengthen your brothers.

9 Whoever covers an offense seeks love,
but he who repeats a matter separates close friends.
10 A rebuke goes deeper into a man of understanding
than a hundred blows into a fool.
11 An evil man seeks only rebellion,
and a cruel messenger will be sent against him.
12 Let a man meet a she-bear robbed of her cubs
rather than a fool in his folly.
13 If anyone returns evil for good,
evil will not depart from his house.
14 The beginning of strife is like letting out water,
so quit before the quarrel breaks out.
15 He who justifies the wicked and he who condemns the righteous
are both alike an abomination to the Lord.
16 Why should a fool have money in his hand to buy wisdom
when he has no sense?
17 A friend loves at all times,
and a brother is born for adversity.